Heat pipes have become an indispensable part of modern thermal management systems: thanks to their extremely high thermal conductivity of 5,000 to 20,000 W/mK due to vaporisation heat, they can be used to replace metallic conductors such as copper very effectively and make decentralised cooling possible. HALA supplies 2-phase assemblies based on heat pipes or flat vapour chambers (VC for short). Vacuum inside the tube lowers the evaporation temperature.

The above mentioned heatpipe modules from HALA can be combined individually. So we can create individual heatpipe assemblies that optimally fit any application. In addition to the heatpipes, HALA offers many combinable heat conduction materials.

How does a heat pipe work?

A heat pipe is a 2-phase heat conductor in the form of a hermetically sealed, tubular metal body that conducts heat over long distances with little loss. The long metal tubes are known primarily from processor coolers, where they transport the heat from the base plate to the fins of a heat sink. This is done by absorbing the heat at one end of the heat pipe (evaporator) and releasing it to the environment at the other end (condenser). Latent heat is used for transport in the quasi-adiabatic part, i.e. evaporation or recondensation. 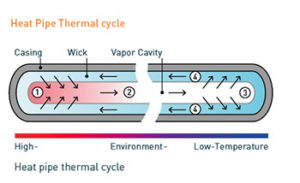 How are heat pipes constructed?

What is in the heat pipes?

Heat pipe vs. vapour chamber: What are the differences and advantages?

What is a Vapor Chamber?

A vapour chamber works according to the same principle as a heat pipe, only it is flat. It is therefore not a tubular component, but a flat one that also dissipates heat by means of evaporation. This is why it is often called a flat heat pipe. However, vapour chambers can also be constructed from 2 half-shells of copper that are tightly connected and inside which there are sintered and base structures.
Since vapour chambers have a very large contact surface, they are called heat spreaders isothermalising the heat. Vapor chambers are used, for example, in notebooks to distribute the waste heat, which is generated as a thermal hot spot in a small chip, evenly over a large-area heat sink.

How does a Vapor Chamber work?

The functioning of a vapour chamber differs only slightly from that of a classic, tubular heat pipe. The main difference is the larger contact surface, which ensures that the VC can have more direct contact points with hot spot type heat sources. This means that heat generated at specific points can be distributed homogeneously over a larger area, and the heat sink is also connected via significantly more contact points.
Vapor chambers are popular for applications such as laptops. For years, however, classic heat pipes were also used here for cost reasons. Whether a vapour chamber or a “classic” heat pipe is better suited depends not only on the application, but also to a large extent on the required support.
An intermediate solution is several heat pipes embedded in a metal plate made of aluminium or copper, which together with the metal form a heat-spreading surface.

How do heat sinks with heat pipes work?

The principle of a heat pipe has already been explained above: it is a very fast closed heat conductor and can conduct heat over long distances with very little loss. For this to function, it must be ensured that there is an efficient heat sink at one end of the heat pipe. This is usually a cooling device in the form of a heat sink without or actively with a fan or a liquid cooling system, which is connected to the heat source through the heat pipe.
Put simply, heat pipes are coupled heat sinks as a small self-sufficient heat management system, which in practice is supplemented by further heat management components to achieve an optimal connection.

Where are heat sinks with heat pipes used? (H2)
Thanks to a variety of designs, heatpipes are widely used in many industries:
– Automotive (e.g. LED headlights, powertrain, batteries for e-vehicles, infotainment, e-mobility).
– Industrial (e.g. industrial notebooks, high-performance computers and processors, servers, graphics cards, gaming, IoT products, camera systems, high-performance LEDs)
– Power supply (e.g. voltage converters, power supplies)
– Consumer electronics
– Defence, Military and Aerospace
The main reason for the widespread use of heat pipes is their variation possibilities:
The classic tubular heatpipes, for example, can be bent so that corners and edges are no problem. They can also be manufactured with an angular or flattened cross-section and thus also be used as direct contact heatpipe heat sinks. If they are manufactured in particularly small dimensions for small applications such as smartphones, handheld consoles, remote conditions or power banks, they are referred to as nano-heatpipes. In these applications, however, very thin vapour chambers of 0.5 mm and less are increasingly being used. In more complex systems, vapour chambers and heatpipes can also be combined as hybrid solutions to decentralise cooling.
A special design are cylindrical heat pipes, so-called heat columns with sinter filling, which have such a large diameter that the heat can be introduced directly into the base and the heat sink is connected around the cylinder as a fin stack or extrusion component. Due to their large volume, heat losses far in excess of 100 watts can be transported.
High-temperature heat pipes, which transfer heat of up to 850 ° Celsius, are a special case. These are used in biomass gasification or injection molding devices, for example. Sodium is usually used as the working medium here.

What distinguishes heat pipes from other cooling systems?

First of all, a heat pipe is not, strictly speaking, a cooling system. A heat pipe is part of a cooling system if it is ensured that there is a heat sink at one end of the heat pipe to which the transported heat can be transferred. If this is not the case, the pipe simply heats up and the heat is not conducted – after all, it cannot be released. The heat pipe therefore only works if it is installed correctly and is then at best part of a cooling system and assembly, but not one itself.
A cooling system – or thermal management system, as we call it at HALA – is a system designed to prevent overheating of applications that usually operate electronically and/or mechanically. For this purpose, the dissipated heat is conducted from the point of origin, for example by means of heat pipes, and fed to a heat sink. In this way, the power component remains within the operating temperature and can work at its optimum.
When using heat pipes, it must be noted that these are closed systems. Compliance with the specified temperature range is therefore essential – otherwise the heat pipe may deform due to the high internal pressure. Due to their shape, round heat pipes are less sensitive to temperature (up to over 200 °C) than unreinforced flat heat pipes or vapour chambers (up to 110 °C depending on the geometry). In order for the heat pipe to develop its effect, it must fit the conditions of the respective application. An individual design-to-cost alignment with the application also prevents using an overly complicated solution and wasting money.
In addition to the heat pipes, gap fillers or heat conducting foils, heat conducting pads or phase change materials must be used in cooling systems to best conduct the dissipated heat into the evaporator – the more critical transfer – and out of the condenser. What is the best choice for the application in each case depends on a number of factors, which we list below.

If you want to buy heatpipes, you will find a large selection of different designs online: The best known are probably the tubular heatpipes with a round cross-section. HALA offers individual designs of heatpipe assemblies with tubular heatpipes with square or flattened cross-sections as well as flat heatpipes (vapour chambers, VC) or heat colums.
To find the right heatpipe for your application, you should consider the following factors:
1. heat output to be transported and type of heat source
2. type of heat dissipation (heat sink)
3. contact with the heat source
4. positioning and location of the heat pipe
In addition, of course, there are the usual project-related boundary conditions such as budget specifications (design-to-cost), manufacturability (design-to-manufacture) and the production quantity of your project.
In order to find the optimal heat pipe solution for your project, taking all factors into account, it is essential to proceed systematically: Because heat management is not finished with one heat pipe, but requires a comprehensive system in which every detail is right.
Therefore, all of the above-mentioned heat pipe assemblies can be combined individually. In our range you will also find heat conduction materials to complement them, such as heat conduction foils for minimal bond lines that optimise contact.
The best thing to do is to contact us directly – we can advise you free of charge and conveniently online at any time.